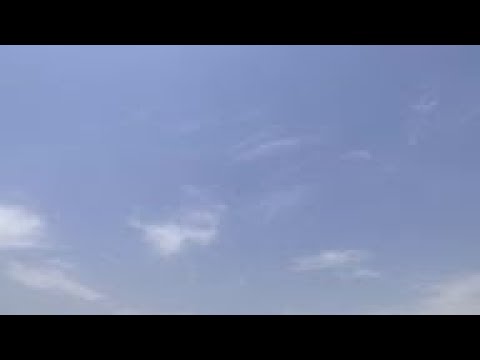 (20 May 2020) LEAD IN:
The world cut its daily carbon dioxide emissions by 17% at the peak of the pandemic shutdown last month, a new study has found.
In Egypt air pollution levels have dropped in Cairo as a result of the ongoing lockdown imposed by COVID-19.

STORY-LINE:
The quieter streets, clearer skies and seemingly clearer waters following lockdown here in the Egyptian capital Cairo.
Senior environment officials say in the past month air pollution across the country has fallen in the past month.
And it is not just Egypt.
In a new study of global carbon dioxide emissions during the coronavirus pandemic, an international team of scientists calculated that pollution levels have seen the biggest annual drop in carbon emissions since World War II.
Emissions are now are heading back up – and for the year will end up between 4% and 7% lower than 2019 levels.
It’ll be 7% if the strictest lockdown rules remain all year long across much of the globe, 4% if they are lifted soon according to the study published Tuesday May 19, in the journal Nature Climate Change.
Mustafa Murad, Air Quality Control Officer at the Environment Ministry, says air pollution in Cairo has fallen by 36% since the government stepped up its measures to stem the spread of the virus.
With a nationwide night-time curfew, a massive number of vehicles have been taken of of the streets every day, resulting in a clear reduction of their emissions, which are one of the main causes of pollution in Cairo.
Dr. Mohamed Abdel-Karim Abdrabo, an expert in environmental economics says: “When you have less traffic, less traffic congestion, when you have less economic activities it means less emissions so the quality of the environment in terms of air, water, soil would be different and we for the first time managed to see it first hand during this lockdown”
In the coastal city of Alexandria, residents are enjoying a bright blue skyline and unusually clear Mediterranean waters.
Abdrabo believes we human beings need to reconsider our lifestyle to address the issue of environmental damage.
“We need to have some sort of a balance between our economic activities, our human activities and the quality of the environment, we need to work on that we need to reconsider the whole style of life that we are living,” says Abdrabo.
Egypt has closed schools, universities, mosques, churches and archaeological sites including the famed Giza Pyramids in an effort to slow the spread of the COVID-19 pandemic.
All international air travel has been stopped, and restaurants, coffee shops, shopping malls and gyms have been closed at night to encourage people to stay home.
The government has also imposed a partial lockdown on specific areas of  the country, barring entry to some popular tourist resorts and cities.
Egypt’s population has exceeded 100 million and is largely concentrated along the Nile Delta and especially in the Greater Cairo area, which includes Cairo province and the urban areas of Giza and Qalyubia provinces.
The main pollution sources in Egyptian cities are motor vehicle emissions, transportation, open burning of waste, factories and constructions.
For a week in April, the United States cut its carbon dioxide levels by about one-third. China, the world’s biggest emitter of heat-trapping gases, sliced its carbon pollution by nearly a quarter in February, according to the new study.
India and Europe cut emissions by 26% and 27% respectively.

You can license this story through AP Archive: