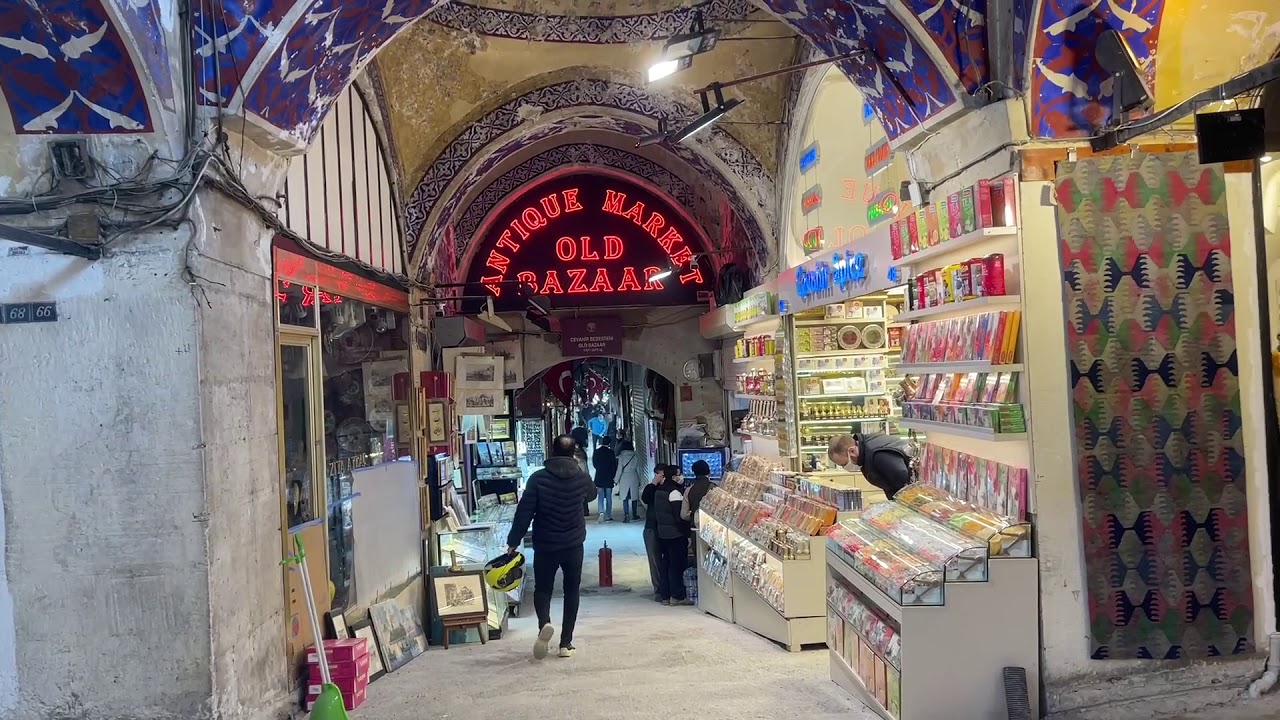 The Grand Bazaar is located inside the Walled city of Istanbul, in the district of Fatih and in the neighbourhood (mahalle) bearing the same name (Kapalıçarşı). It stretches roughly from west to east between the mosques of Beyazit and of Nuruosmaniye. The Bazaar can easily be reached from Sultanahmet and Sirkeci by trams (Beyazıt-Kapalıçarşı stop).

The construction of the future Grand Bazaar’s core started during the winter of 1455/56, shortly after the Ottoman conquest of Constantinople and was part of a broader initiative to stimulate economic prosperity in Istanbul.[7] Sultan Mehmed II had an edifice erected devoted to the trading of textiles[1][8] and jewels near his palace in Constantinople.[9] It was named Cevâhir Bedestan (“Bedesten of Gems”) and was also known as Bezzâzistan-ı Cedîd (“New Bedesten”) in Ottoman Turkish. The word bedesten is adapted from the Persian word bezestan, derived from bez (“cloth”), and means “bazaar of the cloth sellers”.[10] The building – named alternately in Turkish İç (“Internal”), Atik (“Ancient”), or Eski (“Old”) Bedesten – lies on the slope of the third hill of Istanbul, between the ancient Fora of Constantine and of Theodosius. It was also near the first sultan’s palace, the Old Palace (Eski Saray), which was also in construction in those same years, and not far from the Artopoleia (in Greek) (Άρτοπωλεία), the city’s bakers’ quarter in Byzantine times.[11]

The construction of the Bedesten ended in the winter of 1460/61, and the building was endowed to the waqf of the Hagia Sophia Mosque. Analysis of the brickwork shows that most of the structure originates from the second half of the 15th century, although a Byzantine relief representing a Comnenian eagle, still enclosed on the top of the East Gate (Kuyumcular Kapısı)) of the Bedesten has been used by several scholars as proof that the edifice was a Byzantine structure.[1]

In a market near the Bedesten, named in Turkish Esir Pazarı, the slave trade was active, a use also carried over from Byzantine times.[12] Other important markets in the vicinity were the second-hand market (Turkish: Bit Pazarı),[10] the “Long Market” (Uzun Çarşı), corresponding to the Greek Makros Embolos (Μακρός Ὲμβολος, “Long Portico”), a long porticoed mall stretching downhill from the Forum of Constantine to the Golden Horn, which was one of the main market areas of the city,[13] while the old book market (Sahaflar Çarşısı) was moved from the Bazaar to the present picturesque location near the Beyazid Mosque only after the 1894 Istanbul earthquake.

Some years later [14]—according to other sources,[12] this occurred in 1545 under Sultan Suleiman I—Mehmed II had another covered market built, the “Sandal Bedesten” (the name comes from a kind of thread woven in Bursa, which had the colour of sandalwood[15]), also named Küçük (“Little”), Cedit or Yeni (both words meaning “New”) Bedesten, which lay north of the first.[citation needed]

After the erection of the Sandal Bedesten the trade in textiles moved there, while the Cevahir Bedesten was reserved for the trade in luxury goods. At the beginning the two buildings were isolated. According to the 16th-century French traveller Pierre Gilles, between them and the Mosque of Beyazid stood the ruins of churches and a large cistern.[12] However, soon many sellers opened their shops between and around them, so that a whole quarter was born, devoted exclusively to commerce.Grand Bazaar in Turkey. For the Grand Bazaar in Tehran, Iran, see Grand Bazaar, Tehran

My name is Eric Clark and I am a world traveler. I have been around the world a few times and decided to help fund my travels by sharing my videos and pictures. I have been to almost every country and would be glad to give tips and pointers. Drop me a note. = )