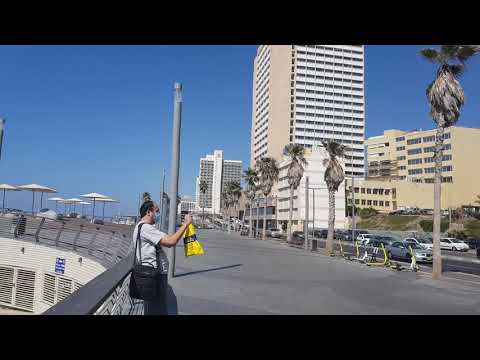 An important and personal request from me (followed by information about the site): unfortunately as a tour guide I have not worked since February 2020. Please subscribe to my site and let me show you the Holy Land through it
I would be happy if you could share the site with your other friends who are interested in the rich and sacred history of the place

The Ministerial Committee on the Coronavirus Pandemic decided on Thursday evening on a full two-week lockdown to be imposed across the entire country beginning next week, just before the Jewish New Year.
Follow Ynetnews on Facebook and Twitter
The three-phase plan will be presented for the approval of the full cabinet on Sunday.
The decision was reached after long hours of deliberation, although there was no agreement on when the lockdown should come into effect. Prime Minister Benjamin Netanyahu was due to travel to the U.S. next week.
Police prepare to enforce full lock down to be imposed before the Jewish New Year(Photo: Moti Kimchi)
During the two-week lockdown, all non-essential work and commerce would halt, including restaurants, leisure and entertainment centers, shopping malls, domestic tourism sites and commercial centers. Food stores and pharmacies would remain open.
Teenage siblings implicated in Eilat gang rape put on fresh 3-day remand
ביטוח הרכב מסתיים החודש? מלא טופס וקבל 4 הצעות עוד היום
נטו-ביטוח
Israel reopens its skies to nationals returning from ‘green’ countries
Schools will be closed down although children from fifth grade and up would continue to distance learn online.
People will be restricted to no further than 500 meters from their home except for the purchase of vital supplies.
Prayers and other gatherings would be permitted under the restrictions imposed on red zones, with a limit of no more than 10 people congregating indoors and no more than 20 outside.

The coronavirus ward at the Meir Hospital in Kfar Saba (Photo: AFP)
After the initial lockdown, and in the second stage of the proposal, less stringent measures would come into effect with more businesses allowed to open and people no longer restricted to the vicinity of their homes but barred from traveling outside their municipal borders. Schools would remain shut and the restrictions on congregations would remain in place.
After two weeks, the third phase would begin with the government approved Traffic Light plan presented by coronavirus czar Ronni Gamzu, in which activity would be allowed according designation of localities as green, yellow, orange or red based on the amount of morbidity and infection rates.
Though the proposal was supported by eight ministers, four others objected including United Torah Judaism leader Minister Yaakov Litzman who was heard accusing Gamzu of attempting to bring down the government saying, “I know the man. He is lying.”
Israel saw 4,013 new coronavirus infections on Thursday – a daily record high for the country with the death toll from COVID-19 reaching 1,075.
A report released Thursday by Coronavirus National Information and Knowledge Center also calls for a full lockdown on the grounds that this is the only way to bring down morbidity in a reasonable time frame.
The report by the center, which operates under the auspices of the Health Ministry and run by Military Intelligence, says that closure has shown itself to be an effective way of lowering morbidity.
“As a way of reducing the rate of infection, closure is a proven tool – when it lasts for long enough and the conditions for its implementation are met (the ability of the people to cope under restrictions of movement and distance and their willingness to abide by them),” the report said.
“In most cases worldwide, morbidity has dropped to desired levels after a few weeks. However, this length of time, with restrictions on movement, also exacts a high price on the local society and economy,” it said.
סגר בשכונת רוממה בירושלים
Police enforcing lockdown in a Jerusalem neighborhood earlier this year (Photo: Yoav Dudkevitch)
The report also stressed that the sooner such measures are implemented, the lower the death toll and the quicker morbidity levels can be lowered.

Zahi Shaked A tour guide in Israel and his camera zahigo25@walla.com +972-54-6905522 tel סיור עם מורה הדרך ומדריך הטיולים צחי שקד 0546905522
My name is Zahi Shaked
In 2000 I became a registered liscenced tourist guide.
My dedication in life is to pass on the ancient history of the Holy Land.